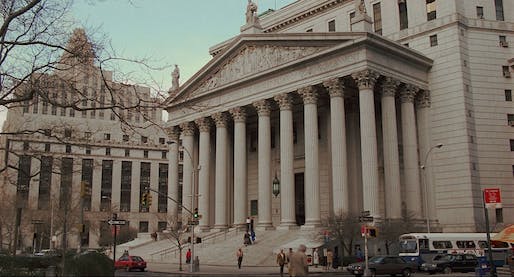 Since January 20th, 2021, President Biden has been swift in revoking and undoing many of Trump’s blunders while in office. Before he left, Trump made a great effort to sign and pass his executive order making classical architecture the “preferred and default style” for all updated and future federal buildings. However, late Wednesday evening on February 24th, President Biden was keen on rescinding that order.

With the order now revoked, what happens next? NPR’s Elizabeth Blair reminds us in her report that along with Trump’s classical architecture mandate, he also appointed a handful of individuals to help carry out his plans. Modern architecture critic and current U.S. Commission of Fine Arts (CFA) Chair and president of the National Civic Art Society (NCAS), Justin Shubow shared with NPR, “our federal architecture has been dismal for decades, and has been designed in modernist styles that do not represent what ordinary Americans actually want.”

To expand on Blair’s coverage Phillip Kennicott, art and architecture critic of the Washington Post, commented on the CFA’s “all-white, all-male, and almost entirely mediocre” board. He expressed the need for Biden to “move quickly” to replace the current CFA members. He called for the President to replace its current members with “a diverse body of professionals, including women and people of color, who bring a wide and spirited range of aesthetic viewpoints to the commission’s monthly meetings.”

However, Shubow shared with NPR that the NCAS “intend[s] to work with the Biden administration to implement change that will build a truly democratic architecture” adding that “historically our advice is always needed.”

It’s only a matter of time before responses from architecture institutions trickle in. The AIA’s CEO Robert Ivy shared his thoughts with Politico, “though we are appalled with the administration’s decision to move forward with the design mandate, we are happy the order isn’t as far-reaching as previously thought.” Earlier today AIA 2021 President Peter Exley shares, “By overturning this order, the Biden Administration has restored communities with the freedom of design choice that is essential to designing federal buildings that best serve the public. This is fundamental to an architect’s process and to achieving the highest quality buildings possible. We look forward to continuing to work with the Administration towards developing policies that create healthy, just and equitable communities.”